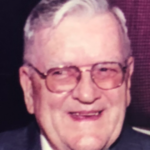 He was born March 14, 1923 in Hammond, son of Loren R. and Ellen Chase Decker. He was educated in Hammond Schools. Bob married Mary Aline Constance Amyot, on May 16, 1945 at St. Patrick’s Church, in Rossie. Bob owned and operated his own farm on County Route 1, until 1970 and also worked as a bus driver for Hammond Central School. He then served as highway superintendent for the town of Hammond for 20 years, retiring in 1992.

He was a member of the K of C, and played in the band “Blue Notes” for many years.

Calling hours will be Tuesday, May 1st from 4-7 pm at the Costello Funeral Home, Alexandria Bay. The funeral mass will be Wednesday, May, 2nd at 10 am at St. Peter’s Church, Hammond with Fr. Douglas Decker and Fr. Robert Decker, officiating. Burial will be at Fineview Cemetery, Hammond.

Memorial donations may be the Cystic Fibrosis Foundation, the American Diabetes Association or St. Peter’s Church.