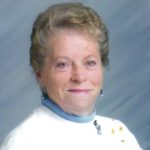 rene Coles, 87, of Goose Bay passed away peacefully at home under the care of her daughter and son-in-law, Eileen and  Gary Maloy, and Hospice of Jefferson County.

Laura was born on December 10, 1930, in Norwich, NY, the daughter of Scott Eljy and Mildred Irene Card Rogers.   She graduated from Otselic Central High School in 1949.

In April of 1950 Laura married William Edward Coles in Norwich, NY The family moved to Goose Bay, Redwood, NY in 1968. Mr. Coles passed away in September 1992.

Laura worked as an office manager/bookkeeper for Thousand Islands Medical Group form 1969-1994 (receiving her CMA degree in 1979). From 1994 until 2009 she held sundry secretarial/clerical positions for Nationwide Insurance and local offices.

Laura was elected to the Alexandria Town Council in 1997, the first female to serve on the board, and served until 2005. She was instrumental in forming a group to prevent closure of the EJ Noble Hospital (now operating as River Hospital since April 2003). She was an active member of the board of directors for River Hospital as well as River Hospital Foundation from 2003-2010 and remained Emeritus on both boards. She was a member of the American Legion Auxiliary, Spay Neuter Now, and the Barnes Settlement Cemetery Board of Directors.

There will be no calling hours or funeral service.

Memorial contributions may be made in her name to River Hospital Foundation or the charity of one’s choice.