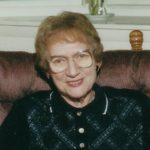 Alexandria Bay — Lillian S. Williams, 96, passed away early Tuesday morning at St. Joseph’s Home in Ogdensburg, where she had been a patient since November of 2017.

Lillian worked for many years as an Operator for New York Telephone in Ogdensburg and then Alexandria Bay. She was a member of the American Legion Auxiliary, was an avid bowler and enjoyed playing BINGO.

Calling hours will be held from 5-8 at Costello Funeral Home on Friday, March 24th.  A funeral mass will be at 11:00 am on Saturday at St. Cyril’s Catholic Church with Father Doug Comstock officiating.  Burial will follow at Barnes Settlement Cemetery.