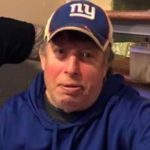 Douglas L. Senecal, 52, of Cornwall St., Alexandria Bay, passed away Thursday, February 22nd at River Hospital where he had been a patient since February 15th, 2018.

Douglas was born on December 20, 1965, the son of Loyal and Juanita Plantz Senecal.  He graduated from Alexandria High School. He was employed as part of the kitchen staff at Cavallario’s Steak House in Alexandria Bay for over 30 years.

“Dougie” was an avid sports fan.  He played in Alexandria Men’s Golf League and was a member of the Sons of the American Legion.