Plessis- A graveside service for George B. Shultz, 79, will be held Saturday, June 2nd at 11:00 am at Brookside Cemetery, Plessis. The service will be officiated by Pastor Freddie Webb. 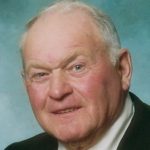 George B. Shultz, 79, of Plessis, NY passed away Tuesday morning at Samaritan Keep Home, where he had resided since March 28, 2017

George was born in Brownville, NY on July 27, 1938, the son of G. Danford and Marion Phelps Shultz.  He attended Alexandria Bay High School and belonged to the New York National Guard in his early years.

On February 27, 1960, George married Mary Delosh at the parsonage of the Theresa Methodist Church.

He owned and operated Geo B. Shultz Scrap Metals in Plessis for many years as well as owning and operating D&G Country Market in Plessis.  He also worked with M&M Plumbing and Heating and for Willie Nash of Syracuse installing boilers in many of the area schools.

George was also Highway Superintendent for the Town of Alexandria and a member of the Jefferson County Highway Association for many years until retiring due to health.

He was avid in dirt stock-car racing, fielding and racing many cars from Edgewood to LaFargeville, and the old Watertown Speedway.  In later years he enjoyed NASCAR, wrestling, and general visits from his many friends and family.  He especially enjoyed his pride and joys – his grandchildren.

George is survived by his wife of 57 years, Mary Shultz; two daughters, Elizabeth S. (Beth) LaClair, and her husband Alan, and Marion S. Ward, and her husband Jeff; three grandchildren, Teagan and Brock Ward and Mary Ann LaClair-Nelson and her husband Michael Nelson; also his sister Audrey and her husband Gerald Robbins; his half-brother Fred Shultz and half-sister Nellie s. Williams; many nieces and nephews.

A graveside service will be announced in the spring at Brookside Cemetery in Plessis.

Memorial donations may be made to the Alzheimer’s Association or the Samaritan Keep Home, where the family would like to thank the staff of the 8th floor for providing George with such excellent care.