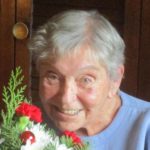 Sally J. Booth, 83, a lifelong resident of Cape Vincent, passed away at home surrounded by her loving family, and under the care of Hospice, on Thursday, January 25th, 2018.

Born January 3, 1935, in Watertown, NY, the daughter of the late John J. and Frances Laba Busack, she graduated from Cape Vincent Central School in 1952 and from Jefferson Community College, Watertown, in 1981, earning an Associate’s Degree in Liberal Arts.  Sally was employed at Eastman Kodak Company, Rochester, for 10 years and was a waitress in Cape Vincent for 20 years at the Broadway Diner, Aubrey’s Lunch Counter, Hotel Roxy, Sleepy Hollow, and Half-Way Chalet restaurants.

Sally married the love of her life, Richard B. Booth, on July 20, 1957, the son of the late Earl R. and Dorothy Robinson Booth, at the United Church of Cape Vincent with the Rev. Oliver Bark officiating.  She enjoyed fishing with her husband, reading, cooking, gardening, genealogy, sewing, knitting, and taking care of her three children.  She was a Director and volunteer at the Cape Vincent Historical Museum, President of the Cape Vincent’s Women’s Republican Club, Past President for the the Jefferson County Republican’s Club and Committee Woman for the Town of Cape Vincent.  Sally was also a Lay Minister at the Stone Mills United Methodist Church for two years until she resigned due to health issues.

The last surviving member of her family, she was predeceased by her parents; her one brother, Richard Busack, and her two sisters, Claudine (Dee Dee) Busack Wronski, and June Countryman.

A Celebration of Life Service will be held at 11:00 am  on Wednesday, January 31st at the United Church of Cape Vincent with Rev. Nancy Stanley officiating, followed by a reception at the church memorial hall. Burial will be at a later date.

In lieu of flowers, the family asks that donations in Sally’s name be made to Hospice of Jefferson County, the United Church of Cape Vincent and/or the Three Mile Bay United Church.