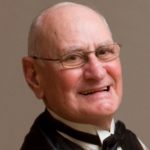 HAMMOND, NY – J. Edgar Amyot, 83, passed away peacefully on December 20th, in Mebane, NC, at the home of his son, Michael.

Edgar worked the family dairy farm in South Hammond with his father starting in 1955, then with his wife until they sold in 1998.  He also owned and operated Amyot’s Garage and served as Town of Hammond Highway Superintendent from 1992 to 2009.

He was a member of St. Peter’s Church and was a former director of the North Country Insurance Company.

Calling hours will be held Thursday, April 12th, from 5-7 at the funeral home. A memorial mass will be said Friday, April 13th at 10 am at St. Peter’s Catholic Church in Hammond. Burial of ashes will follow at Fineview Cemetery, Hammond

In lieu of flowers, donations in his name can be made to St. Peter’s Church in Hammond, NY.