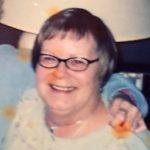 well, 70, of Sheryl Drive, Central Square, and formerly of Hammond, passed away Monday, November 28th, at Upstate Medical Center, Syracuse, after being admitted on Sunday.

She was born January 19, 1946 in Syracuse, daughter of Joseph and Doris Recore Stager. She received her master’s degree from SUNY Oswego. She married Clark Stowell on April 13, 1975 in Lowville. Mr. Stowell died on March 26, 1998.

Doris worked as a home care coordinator for the St. Lawrence County Department of Social Services. She retired in 2008 and moved to Central Square to be near family. She was a member of the Rensselaer Falls Fire Department Ladies Auxiliary, was active in local bowling leagues, enjoyed arts and crafts, and was an avid reader.

A celebration of life will be planned in the spring. Burial will be in Pleasant Valley Cemetery, Hammond.

Memorial donations may be made to the Rensselaer Fire Department or Pleasant Valley Cemetery.