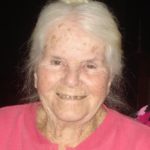 Marguerite N. “Peggy” Ott, 89, long time summer resident of Collins Landing, NY, passed away Thursday September 22nd, at Claxton Hepburn Medical Center in Ogdensburg where she had been a patient since September 6, 2016.

Peggy was born in Buffalo, NY on December 10, 1926.  She graduated from Woodlawn High School in Blasdell, NY. She married George F. “Bud” Ott on August 16, 1947 in Woodlawn, NY. They owned a seasonal rental business together, the “Ott Spot” in Collins Landing. She was also a homemaker. She enjoyed the St. Lawrence River and was an avid gardener. Bud passed away on August 20, 2005.

There will be no calling hours or funeral services.  Arrangements are with Costello Funeral Service, Alexandria Bay.

Memorial contributions may be made in Peggy’s name to T.I.E.R.S. (www.tirescue.org).