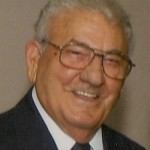 allario, 93, died Friday, December 18 at his home in Alexandria Bay. He was born in Watertown, NY, the seventh son of Carmelo Cavallario and Sarah Rizzo. Frank graduated from Watertown High School in 1941. He served in the US Army during WWII, enlisting at the same time as three of his brothers. Frank married his wife of sixty-eight years, Concetta Sparacino, at St. Anthony’s Church, Watertown, Columbus Day, 1947. They settled in Alexandria Bay. He enjoyed a long career operating first the Chez Paris Restaurant alongside Connie and then he realized his dream of opening Cavallario’s Steak House in 1962. A born host Frankie loved nothing more than providing good times for his customers who, as often as not, became good friends. He contributed in numerous ways to his community including serving as Chamber of Commerce president, Rotary president, a member of the Alexandria Bay Volunteer Fire Department, and Republican Party Committeeman. In addition he was a third degree member of the Knights of Columbus and the Alexandria Bay Lions Club.

After many successful years Frank and Connie turned their businesses over to their daughter Carmen, her husband Chuck Penn and nephew Michael Cavallario. Tamara Quinn assumed operation of the Chez Paris in 2002 and this past summer Francesca and George Ruddy assumed ownership of Cavallario’s Steak House.

Donations may be made to St. Cyril’s Church, Alexandria Bay Rescue Squad or a charity of one’s choice.