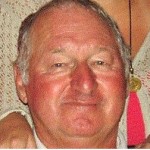 December 12, 2015, Charles D. Scott, 78, passed away Saturday morning to join the love of his life Thelma Grace, the woman he married on a bet.  He was lovingly cared for by his daughter, Dierdre and her husband David, for the last four years at home.

Charles was born in Lyons, NY, on March 14, 1937 to Martha E. Hansson and Charles Peter Scott. He graduated from Alexandria Central School in 1955 and joined the Air Force from which he served until 1959.

He married Thelma in Denver, Colorado on March 8, 1957, and started their family. They criss-crossed the country between NYS and CO.  He was originally going to re-enlist but his duty station would have taken him to Vietnam and away from his family.  He declined and decided to come back to the River that held his heart.

Chuck worked his entire life in Alex Bay for the Thompson family and will be remembered by many for being the captain that all the kids wanted to work with at the Uncle Sam Boat Line. He had an irreverent sense of humor and loved Benny Hill and Monty Python and passed that sarcastic sense of humor down to his kids. They will miss him dearly.

He was predeceased by his wife, Thelma, and a son, Robin, in November 2011. He is survived by his children Brenda (Tony) Cullen, Redwood; Martha (Bud) Thomas, Alex Bay; Cliff (Charlie) Scott, Alex Bay; Dee (David) Bendle, Redwood; and Char (Mark) Lashomb, Clayton. He also has many grandchildren and great-grandchildren.

Per his wishes, there will be no calling hours or funeral. Burial will be at the family’s convenience in Barnes Settlement Cemetery.

Arrangements are with Costello Funeral Service, Alexandria Bay, NY.  Online condolences may be made  at costellofuneralservice.com.