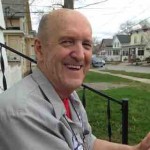 exandria Bay on November 14, 1941 to Raymond and Levina Chayne Rogers. He lived his life in the village and on the river, except for a couple short excursions to Florida to work at the Bertram Yacht Company and the Island Queen Boat tours of Biscayne Bay and a visit to Chicago for training at Cummings Diesel School. David graduated from Alexandria Bay High School in 1959, where he played on the varsity football and basketball teams.

David was a “MAN OF THE RIVER”. He watched the ships, water, wind and clouds, before being a “river watcher” was an acknowledged classification. He was truly connected to the river. Enjoying the sun raising through the morning fog in the fall or savoring spectacular sunsets with a kaleidoscope of colors in the clouds of summer. He took pleasure in sharing his knowledge of boats with anyone seeking guidance. He was always available to recover folks stranded on the river at all hours and all weather conditions. His 100 ton Masters Certification with a towing endorsement, made him one of the few qualified Captains to recover and tow boats on the river. His life could not be separated from the River or the Marina.

He grew up working in the family Marina business, where he learned from some of the most talented mechanics and marine carpenters on the river. His father Ray Sr founded Rogers Texaco Marina in 1949, which became Rogers Marina. Ray Sr. operated the marina until his death in 1969, when David and his brother Ray Jr. took it over. In 1971 David became the sole owner and he operated the marina until it was sold and he retired in 2011. Beyond his understanding of marine engines, David had an aptitude for working with anything mechanical and constructed several of the Marina buildings himself. David was a technical design consultant for the marine division of Doug Nash Engineering in the 1980’s in the development of a marine transmission. He enjoyed building and outfitting boats, including three MISS BEHAVE’s constructed from the original Gar Wood Plans, a custom 23′ Formula outfitted with a pair of V8 inboard engines and a 16′ Formula Jr, with a single V8 inboard for David’s personal use.

Vintage Race boats became a big part of his life, owning and driving “Wild Blue” an E hydroplane and “High Hopes” an E service runabout. He enjoyed the camaraderie of the vintage boat community and sharing the things he learned about boats and motors.

David was passionate about the shooting sports. In 1967, he was a member of the skeet shooting squad from the Bay and competed in the Winchester Clay Bird Tournament, where he received a pair of presentation shot guns from Winchester for his efforts. He was a founding member of the Thousand Islands Sportsmen Club, where he worked to construct the original sporting clays course and rifle range, as well as the club house. David was an NRA member, certified Pistol Instructor and an avid supporter of the club until his death.

The Alexandra Bay Fire Department was large piece of his life, he committed his time and service for our community. A member of the department for over 58 Years, holding several ranks including chief from 1974 to 1980. His focus on a methodical approach and a need for safety, made him a good leader for the department.

Calling hours will be held from 6-9 pm Tuesday at Costello Funeral Home, Alexandria Bay.  The funeral will be held on Wednesday at 11 am at the Reformed Church of the 1000 Isles with Pastor Jeff McIlrath officiating.  Burial will be at Highland Park Cemetery.